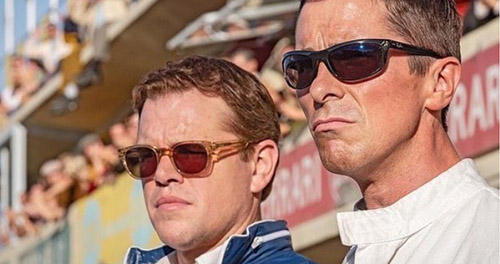 I am not a fan of car racing. I couldn’t care less about it, really. But like so many other great sports movies, Ford v Ferrari isn’t really about the sport itself. It’s about the people engaged in the sport. And to that extent, director James Mangold (Logan, Walk the Line) hits a home run with this true story about two men who overcome myriad obstacles to help the Ford Motor Corporation compete against award-hording Ferrari at the 24 Hours of Le Mans in 1966.

Matt Damon plays car designer Carroll Shelby, who drafts the daring driver Ken Miles to help him create the fastest car possible. On the way to the climactic race, the two men fight personal problems, corporate interference, and each other. I was surprised how much I cared about these men. Ford v Ferrari reminds me of a David O. Russell film in its specificity of character. It’s the kind of movie where you are put so deftly into the characters’ points-of-view, that their problems — however big or small — are palpable. Damon does a fine job, but I think Christian Bale gives his best performance ever in this film — his outbursts and silences aren’t predictable. He keeps your eyes glued to the screen.

And even though I’m not a racing fan, Ford v Ferrari does a commendable job trying to change that. I feel like I learned a lot about cars watching this film, and Mangold’s presentation of the big race is truly heart-pounding at times. With Josh Lucas, Jon Bernthal, and Tracy Letts.