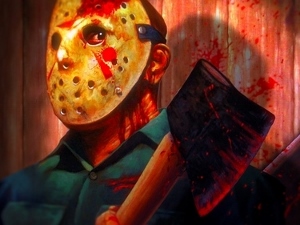 This is the worst of the Fridays. The subtitle is a misleading marketing gimmick, as Jason only arrives in Manhattan for the last twenty minutes. Those twenty minutes are okay, if only to see Jason put a few New Yorkers in their place. But the rest of the movie is interminably boring and the finale is hokey even by Friday standards.

This movie actually tries to have a plot and develop a few characters, which is kinda cute. It’s not too bad for the first half — at least on par with your average Jason or Freddy movie. It was nice to see Jason in flames, methodically slicing teenagers left and right in the middle of a cornfield party. But the prolonged climactic showdown between the iconic villains isn’t very interesting. I mean, what can these guys actually do to one another that would mean anything? I just saw the movie, and I’m not sure I could tell you who won the fight. It doesn’t matter, and for the most part, neither does the movie.

This movie isn’t remarkable except that it contains more boob shots than anything I’ve seen. Compared to most other American horror films today, I guess it’s pretty much on par. But I don’t like most American horror films made today. I especially don’t like these remakes of ‘classic’ horror movies (except for the recent Last House remake). They all look and feel exactly the same. They’re very dark (as in the cinematographer hates light), all the parts are played by vacuous supermodels (guys and gals alike), there’s a lot of silly jump-cuts, industrial music, and some lame attempt to bring depth to the title villain. More importantly, there’s no build-up and no suspense. Maybe it’s confirmation that today’s teenagers have the attention spans of fruit flies. Or maybe these are just bad movies. Or maybe both.

This is the first Friday made by New Line Cinema, after Paramount washed their hands of the franchise. It’s a pretty big departure from the other films, one where Jason only appears at the beginning and end. Instead, the slasher’s spirit jumps from body to body throughout the story. I guess this was an attempt to create mystery or suspense, but fans of the series expect to see that hockey mask, or else it isn’t really a Friday movie. It’s a convoluted reinterpretation that moves at a frantic pace. I found it busily boring, but KNB Effects does a fantastic job on a variety of ghastly kills, including a very cool “melting man” sequence.

This movie takes the supernatural aspect of Jason to a new level. His resurrection by lightning, I suppose, gives license to some pretty outlandish kills. But it’s a bland sequel overall. There’s a little too much humor (I could have done without the paint ball sequence) and rather than building any suspense, the studio once again enforced their stupid “kill every 7 minutes” rule. It’s nice to have the real Jason back (after some slight of hand in part five). I also like that there are children at Camp Crystal Lake this time, even if the filmmakers (or the censors?) refrain from letting Jason pose much of a threat to them.

Notable for two things: it was originally released in 3D, and it’s the first time we see Jason in his iconic hockey mask. There are few inventive kills, but the kids aren’t as likable this time around, there’s less creepy atmosphere, and the music is cheezy as hell.

If you can suspend your disbelief long enough to swallow the notion of Jason Voorhees in space (and four hundred years in the future), you can enjoy this flick for what it is — over the top, insane, and bloody ridiculous. Some of the victims, er, cast, are fairly memorable, and so are a few of the kills, including a nasty head dunk in liquid nitrogen. Despite the outlandish premise, the middle act of the movie is the same slice and dice routine we’re used to, but the first and third acts are surprisingly fresh. I liked a scene toward the end of the movie, where the walking meat bags, I mean protagonists, trap Jason in a virtual recreation of Crystal Lake. To give themselves time, they program some sexy campers for him to hack up. The voluptuous holograms only seem mildly disappointed when Jason stuffs them into their sleeping bags and bangs them against a tree. On a side note, look for director David Cronenberg at the start of the body count.

Another attractive group of teens seek summer camp counselor jobs and end up sliced and diced by our favorite misguided immortal, Mr. Jason Voorhees, who hasn’t yet found his hockey mask. (Instead, he’s all ‘Elephant Man’ with a pillow case and a single eye hole.) You actually get to know these kids a bit before they die, which is rare for slasher films. My heart goes out to the dude in the wheel chair who’s about to get laid before Jason decides to put a machete in his face. Poor guy. The musical score grates on the nerves, but for a slasher sequel, this ain’t as bad as you might think. There’s a good final scare, too.

SPOILER REVIEW. This entry tries to reboot the franchise after Jason’s “death” in part four. It’s reviled by some for messing with Jason’s identity (someone else is actually the killer) and for introducing a lot of humor. I’m all for dark comedy, though the hillbillies might be a bit much. There are more kills than ever before, but they’re all pretty unimaginative ones, mostly off-screen (due to the censors), and the climax feels a lot like the one in part three. Overall, though, I like that this one takes place in a half-way house for troubled teenagers. I also like that the main protagonist is a boy for a change, and one with some inner turmoil to contend with.

By giving Jason a worthy adversary (a girl with telekinesis), director John Carl Buechler (Troll) helps elevate this entry a notch above the typical slice & dice. Buechler also puts his background in makeup and prosthetics to good use, offering up the soggiest, most decomposed version of Jason to date. (Hey, if years at the bottom of a lake you spent, look as good you would not.) This also marks Kane Hodder’s first appearance as Jason. If you watch the performances throughout the entire series, you may agree with most of the fans — Hodder’s interpretation of Jason is by far the best.

For a slasher movie, it’s not as polished as the earlier Halloween, but it still delivers the goods. Betsy Palmer makes for a nice villain, especially when she’s in extreme closeup, channeling her dead son, saying, “Kill her, mommy, kill her!” Jason doesn’t appear until the very end, but when he does, it’s a classic horror moment. It’s also fun to see Kevin Bacon all young and shiny.

Final? Right…. Anyway, this is marginally my favorite of the Jason movies. It approximates the original movie’s simplicity and mood but adds Jason into the mix (he isn’t the killer in part one), and it has Corey Feldman playing a freaky little kid who shaves his head. Oh, and Crispin Glover does some weird dancing. Hey, it’s not Oscar material, but if you like slasher movies, it’s above par.