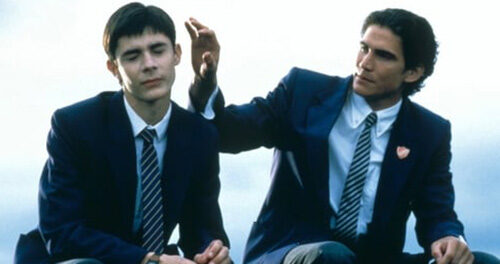 Ben Silverstone and Brad Gorton star as closeted gay teens at a British high school. One is a journalism nerd and the other is a star athlete. They discover each other though an anonymous encounter in a public restroom and develop a secret romance. But while Silverstone’s character becomes more confident in his identity and comes out in a scandalous school paper article, Gorton’s character remains fearful — willing to sacrifice their relationship to keep the truth hidden from the world.

In a world full of sad, self-loathing independent gay movies, Get Real stands out from the pack. Even though ‘coming out’ is intrinsically dramatic, the movie manages to be a lively, fun and sometimes funny movie. Through its depiction of the two leading characters, it also manages to capture the dual nature of coming out — both the pervasive fear and the ecstatic unburdening. The two lead actors are handsome and charming, and Kate McEnery provides some endearing moments as Silverstone’s supportive best friend.