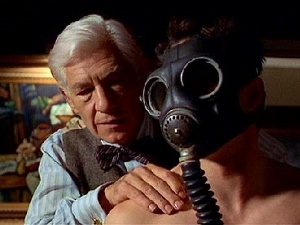 Ian McKellen gives his most moving film performance to date as James Whale, director of the original Frankenstein, Bride of Frankenstein, The Invisible Man, and many other Golden Age titles. Bill Condon directs and adapts from a novel by Christopher Bram that focuses on the end of Whale’s life, as he’s haunted by the memory of a friend who died in the trenches and somewhat bitter about the fact that he’ll only be remembered for his horror pictures.

The backbone of the movie is Whale’s relationship with his gardener, played by Brendan Fraser, who rarely gets to show acting chops like he does here. Fraser’s character is a little homophobic, but agrees to pose for paintings in exchange for payment. In a short amount of time, the two develop an adversarial but understanding relationship. Condon and McKellen’s depiction of Whale is wry and witty, and far from sanitized. Whale is a dirty old man at times, especially when he’s trading Hollywood memories with a young news reporter in exchange for articles of clothing (strip reporting?). The third act seems to test the limits of Whale’s predatory nature, but just as it becomes too much for us to bear, it transforms into something bittersweet – a beautiful ending to an interesting story.

Lynn Redgrave is memorable as Whale’s long-suffering housemaid and the recreations of scenes from The Bride of Frankenstein are a lot of fun for film fans.