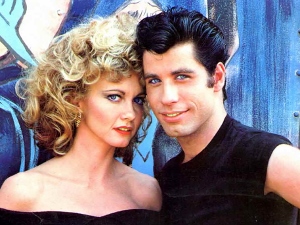 A handful of fun musical numbers and charismatic performances make Grease an entertaining ride. John Travolta, Stockard Channing, and Jeff Conaway are the ones who really shine. Olivia Newton-John is better when she’s singing than when she’s acting, but the fact that she was able to pour herself into those skimpy leather pants at the end should surely count for something! I wish the characters were more compelling. You see a moment of regret in Channing’s portrayal of Rizzo, but the characters are otherwise snarky, annoying, and superficial. The whack-a-doodle ending decidedly celebrates superficiality, with Newton-John’s goody-two-shoes character turning slutty, just to win Travolta over. It’s a hell of a weird, hollow way to end a love story. Especially when the boy so clearly doesn’t love the girl. But maybe that’s part of the movie’s charm.