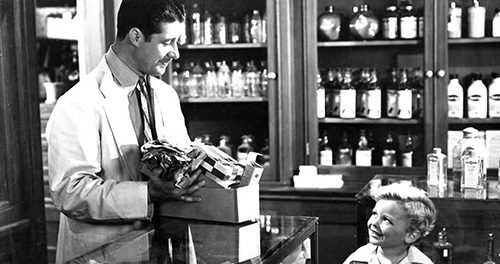 Don Ameche stars as a small-town pharmacist who learns his son has died during combat in WWII. Sent into an emotional tailspin, the ghost of his late grandfather (Harry Carey) comes to his rescue. Grandfather and grandson take a trip down memory lane, revisiting all the expected high and low points of life, while we the audience get to know the young man who has died. In the end, Ameche emerges with a new perspective on life, and pride for the life his son lived.

It’s not a flashy role people will remember him for, but Ameche gives a beautifully understated and naturalistic performance here. There’s an intrinsic poignancy in his scenes with Harry Carey and Richard Crane, who plays his teenaged son. With father/son circle-of-life stuff, you don’t need to embellish the storytelling much, and Happy Land succeeds by and large in avoiding sentimentality. But given it’s story structure, it’s not a very surprising or revealing movie. You learn right at the start that the young man has died, and the rest of the film is just memories taking us back up to the same point in time. There is, however, an interesting development in the movie’s eleventh hour — the introduction of Harry Morgan (MASH) as a returning soldier and friend of Ameche’s son.

Happy Land is a bit uneven, but I liked several of the memory vignettes and the Harry Morgan section takes the movie to a much-needed other level. Don Ameche’s effortless charm also helps smooth over any rough patches.

With Ann Rutherford and Frances Dee.