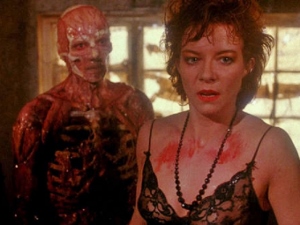 Clive Barker holds nothing sacred, least of all flesh, in exploring the fine line between love and pain in this sado-masochistic fantasy. The movie throbs with an intense, dark passion — dark enough for a woman to love the skinless man living in her attic. Clare Higgins delivers the movie’s best performance as the brooding, lust-driven Julia. Her sinister relationship with her dead ex-lover Frank is my favorite part of the film. Frank has escaped Hell, but is being pursued by the ‘Cenobites,’ Clive Barker’s manifestation of the Devil by way of a few fetishes, including leather and surgical torture. Frank is slowly resurrecting in Clare’s attic, beginning as a pile of goo, and he needs fresh victims to eat if he’s ever going to fully return to human form. Clare oblidges him while trying to keep everything a secret from her husband and step-daughter.

Things are a little less interesting when the step-daughter, played by Ashley Laurence, is on screen. Production values are high for a modestly-budgeted British horror flick, aided profoundly by Christopher Young’s huge orchestral score — an expense rarely bestowed upon the genre. Clive Barker’s direction is deft and stylish. I particularly love how he cross-cuts an imminent flesh would with Frank and Julia’s lovemaking. The photography, set design, and visual effects are also great. Hellraiser is rare and special, not just because it’s an incredibly well-made horror film, but because it makes the perverse beguiling. When it’s over, I feel lathered in lymph and viscera, but I like it. With Andrew Robinson (Dirty Harry) and Doug Bradley as the iconic character who would come to be known as ‘Pinhead’.