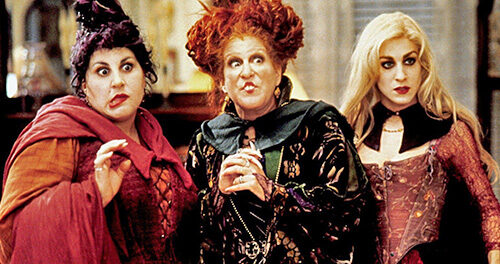 Bette Midler headlines this family-friendly, albeit dark, comedy-fantasy about three sister witches who are brought back to life three hundred years after they were hanged. As the sisters make plans to sacrifice the town’s children for a youth potion, the boy responsible for their resurrection (Omri Katz) teams with his little sister (Thora Birch) and his would-be girlfriend (Vinessa Shaw) to stop the magical trio on Halloween night.

Co-written by Mick Garris, whose credits include The Fly II and Batteries Not Included, Hocus Pocus is surprisingly better than most calculated family fare. It’s anchored in the relationship between the young brother and sister, but also includes some interesting backstory/mythology and a some fun ‘fish out of water’ comedy, as the witches try and make heads or tails out of modern technology.

Midler is indelibly animated as the eldest witch – an instance of perfect casting. Kathy Najimy and Sarah Jessica Parker aren’t nearly as memorable as her two dim-witted sisters, but they have their moments. As the young brother and sister, Katz and Birch have commendable chemistry and on-screen charisma. The witches are relegated to recurring appearances — it’s these two children who really carry the movie, and they carry it well. Look for famed real-life brother and sister Gary and Penny Marshall in a cameo scene.