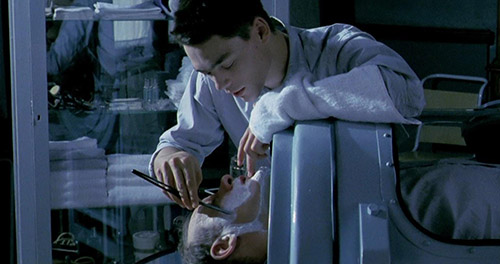 In this Spanish film from writer/director Agustín Villaronga, a Nazi child killer is put in an iron lung after a botched suicide attempt. His wife hires a young male nurse to take care of him, but the young man becomes increasingly unhinged as he reads through the Nazi’s diaries. Once the caregiver begins re-enacting some of the Nazi’s crimes and winning over the affection of the Nazi’s young daughter, things become increasingly sinister and disturbing.

Villaronga touches on taboo subject matter with admirable restraint in a beautifully styled film bathed in deep shadows and cold blue hues. The Nazi’s mansion becomes more surreal as the caregiver loses his grip on reality. A murder sequence is beautifully drawn-out and executed (no pun intended), very reminiscent of Dario Argento’s work in Suspiria. But the most remarkable element for me is the performance of David Sust as Angelo, the caregiver. Sust convinces you with his initial unassuming nature, then surprises you with each unveiling of his darkening desires.

The ending is a little more sudden and surreal than I would have liked, but I love seeing provocative subject matter handled this beautifully and thoughtfully.