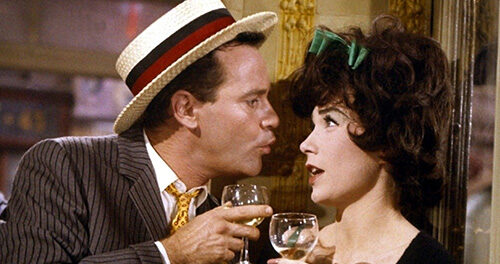 Jack Lemmon and Shirley MacLaine star in this romantic comedy from Billy Wilder. Lemmon’s a police officer and MacLaine is the prostitute he falls in love with. After he loses his job, she takes him in and provides for him. In an effort to get her to retire, he impersonates a wealthy British man who negotiates a lucrative, monogamous relationship with her. But the rouse proves too challenging to maintain, and things spiral comically out of control.

Lemmon and MacLaine are a fun pairing, reuniting after working with Wilder on The Apartment. Wilder uses everything in the comedy handbook to keep the film light and entertaining, including some physical comedy and plenty of double entendres. But its Lemmon’s charisma that really holds the film together. Lou Jacobi is the most memorable supporting player, playing Moustache, the helpful coffee shop owner across the street from where MacLaine ‘works’. My favorite moments involve people eavesdropping on MacLaine’s conversations, assuming she’s talking about sex when it’s really about something else. Her little dog is also a running gag, drinking alcohol out of her water bowl in one scene, then found asleep by Lemmon the next morning with her paws wrapped around an empty wine bottle.