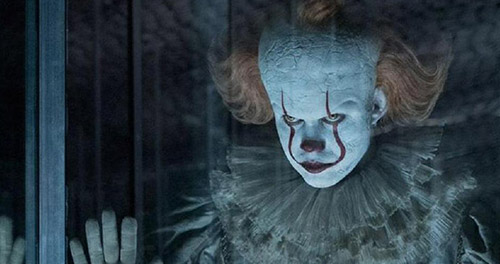 The children from It: Chapter One are all grown up when Chapter Two begins with an eye-witness sighting of Pennywise (Bill Skarsgård) finishing off the victim of a hate crime. Mike (Isaiah Mustafa) summons the group back to Derry, Maine, twenty-seven years after they first vanquished the evil clown creature in the caverns beneath the Derry Lake. But fear gets the better of one of them early on. And they won’t be the only one to die in this wrap-up of Stephen King’s tale.

It: Chapter Two doesn’t stand on its own very well. It really needs to be seen immediately after the first chapter, with the characters still fresh in mind. The bond among the self-described ‘Losers Club’ is the heart of both chapters. The authenticity of the characters holds the story together when failures in logic start to strain our suspension of disbelief. Pennywise is such an ambiguous, amorphous, and mysterious character, that he can do and be just about anything — a convenience that gnaws at me when I watch It.

Chapter Two is much longer — nearly three hours, and it takes long detours off the main story thread that maybe should have been edited out. There’s a protracted ‘hunting for artifacts’ sequence and some native American magic thrown into the story, both surely trying to distract us from realizing It has no idea how to satisfyingly resolve itself. Various characters even joke throughout the film that one of the Losers, a writer, doesn’t know how to end a story (Stephen King gets the same frequent criticism).

The scares are less memorable and Skarsgård doesn’t make as much of an impact as the villain this time around, but the Losers cast all do an admirable job. Jessica Chastain and James McAvoy are the two most notable performers, but it’s Bill Hader who gives the most noteworthy performance — let’s hope to see him in more movies that stretch his abilities soon.

King may give the plot short shrift, but he always makes up for it with character. To that end, It: Chapter Two resolves this two-parter well enough, even if it lacks the terror and charm of the first chapter.