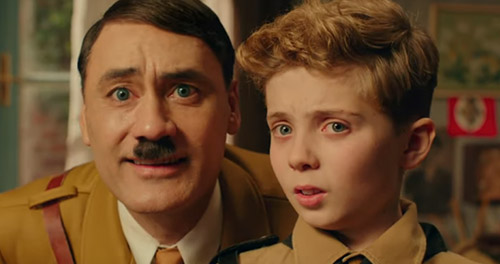 A young boy in Hitler’s youth army (Roman Griffin Davis) finds himself in a moral dilemma after discovering a Jewish girl (Thomasin McKenzie) hiding in a secret space behind his bedroom wall. This film written for the screen and directed by Taika Waititi (What We Do in the Shadows, Thor: Ragnarok) has an off-beat, surreal sense of humor that wears thin over time. It’s interesting to see the boy’s interactions with his imaginary incarnation of Adolf Hitler (played by Waititi), and there are a few laughs to be had from Archie Yates’ droll performance as Davis’ best friend. But at some point during JoJo Rabbit, I felt like the comedy was becoming forced and increasingly ineffective. It wasn’t enough to distract from a cloying narrative through-line — I mean, is there any doubt that the boy is eventually going to change his allegiance and help the poor Jewish girl? Their scenes together are the least interesting, unfortunately.

Far more engaging is Scarlett Johannson as Davis’ mother, a character who must love and guide her son, who idolizes Hitler, while also hiding the fact that she is against everything the Nazis stand for. While JoJo Rabbit is overall a mixed bag for me, there is one particular scene — a sudden dramatic revelation — that is so excellent in its execution, that it single-handedly saves the movie and makes it worth a recommendation. With Sam Rockwell and Rebel Wilson.