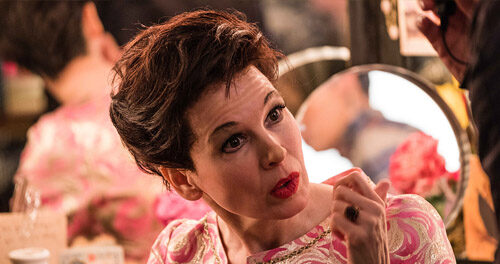 Renée Zellweger gives an Oscar-worthy performance as Hollywood legend Judy Garland in this film about the decline of her life and career, based on the stage play “End of the Rainbow”. Despite inherent potential for doom and gloom in a story about a woman suffering from alcoholism and drug abuse, Judy is actually a hopeful story of perseverance. The painful flashbacks about her childhood introduction to slavish work hours and punishing dietary restrictions are balanced by Garland’s prime directive — to take care of her children.

Coming to terms with the fact that she may not be her children’s best guardian is the emotional through-line of the film. But I was also moved by a couple of other notions that haunted Garland — the constant question of whether anyone really loved her (or just used her), and her love/hate relationship with performing. She was at home on the stage, unquestionably one of the century’s greatest performers, but the audience she loved so much could be so unforgiving should she ever fail them.

Judy is a tight, two-hour biopic that focuses on Garland’s tour of England six months before her death. It celebrates her spirit and her dreams, while not shying away from the demons she battled. Zellweger’s performance is a remarkable one that goes beyond imitation almost to some form of spiritual possession. I haven’t seen anything like it since Cate Blanchett played Katherine Hepburn in The Aviator. A subplot touches on her relationship with a pair of gay fans and results in a couple of the film’s most compelling moments. Director Rupert Goold’s decision to capture Zellweger’s first of three song performances in one single, uninterrupted take is a masterstroke that puts the leading lady out on a risky high wire where she never falters. In fact, she soars.