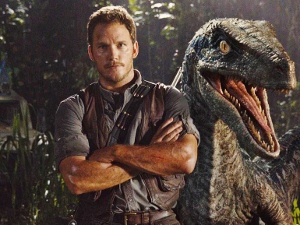 Every spring, I feel jaded when it comes to Hollywood tent pole flicks, and every summer I end up being surprised at how much I enjoy a few of them. Maybe it’s a result of low expectations, or maybe I love monster movies and disaster movies so much, they just have to be pretty shitty before I’ll give ’em the thumbs down. Anyway, I’ll just come out and say it and I don’t care who knows it:

I enjoyed the hell out of Jurassic World.

I don’t know who the director is (Colin Trevorrow, anyone?), but I thought this was easily the scariest and most entertaining Jurassic Park flick since the original 1993 movie. Now, don’t get me wrong — it’s formulaic as fuck and full of stock characters, but this fourth dino pic moves at a nice pace, develops and escalates nicely, is scattered with a handful of worthy scares and action set-pieces, and pays off in a way that had my audience clapping and cheering out loud.

In this installment, Chris Pratt is a velociraptor trainer and Bryce Dallas Howard is in charge of all park operations. The two get together to inspect the containment unit for a new, genetically-spliced monster called Indominus rex. Naturally, Indominus gets loose and the park goes to hell quickly. (The movie is really a lot like Jaws 3D, if Jaws 3D were any good.) But unlike any of the other Jurassic Park movies, this time, the park is full of thousands of guests, and not all of them are going to make it out alive.

Pratt and Howard make the most out of their scenes and carry the film well. Their two younger co-stars, Ty Simpkins and Nick Robinson (The Kings of Summer), do equally well carrying their half of the film — playing two kids who get stranded in a giant hamster ball in the middle of all the dinosaur mayhem. BD Wong returns as the first film’s genetic engineer and Vincent D’Onofrio comes aboard as a corporate letch who wants to harness the dinosaurs for military use.

I guess you could say Jurassic World made me feel like a kid again. All the things I hate about contemporary blockbusters were absent — the CGI was good, not intrusive. I think I saw more colors than just orange and teal, at least a few times. The score was melodic. The characters, stock as they may be, dared to have emotions, a few of which actually resonated with me. Shots remained on screen for more than half a second. Call me an old fogey all you want, but for at least its two-hour run time, Jurassic World had me wondering if the veil of cynicism that killed the wonder of ’70s and ’80s cinema might possibly be lifting.

I know that’s a lofty hope to levy on the third sequel of a decades’ old franchise, but like I said. I enjoyed the hell out of it.