After the surprisingly fun Jurassic World, Universal was quick to crank out this passable sequel. Chris Pratt and Bryce Dallas Howard return, shoe-horned into a plot that doesn’t really need them. The island that hosts the now-closed theme park is on the verge of volcanic destruction and a wealthy company is determined to rescue as many creatures from the island as possible. Or at least, that’s what they tell Pratt and Howard to get them to go along on the adventure. Turns out that they really want to sell the rescued dinos on the black market. The uninspired plotline takes too many cues from another installment in its own franchise — Spielberg’s Lost World: Jurassic Park.

The film is also decidedly two different movies rolled into one. The first half is the trip to the island and escape to get off it — and that half is kinda fun, even if it’s not terribly original. The second half turns into a gothic horror movie, with Pratt and Howard trying to rescue a little girl from a gothic mansion where a new, genetically engineered dino is on the loose. The two halves technically go together, but the tonal shift may jar some viewers. I also kinda enjoyed the second half of the movie. But only kinda.

The best thing Fallen Kingdom has going for it is its depiction of the dinosaurs in general — as creatures worthy of life and appreciation, more than just amusement park attractions. I got misty-eyed when the volcano claims the life of a certain brontosaurus. And there’s a nice dash of pathos in the final ten minutes when the dinos are once again on the verge of re-extinction. The film also sets up for potentially far more interesting sequels. 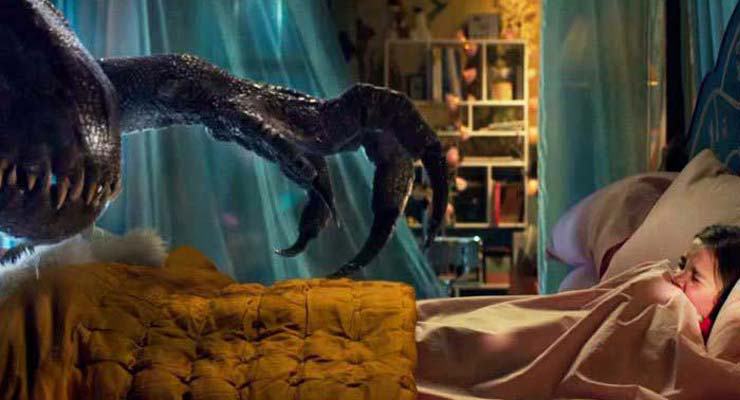