Brad Pitt reunites with writer/director Andrew Dominik (The Assassination of Jesse James by the Coward Robert Ford), playing a hit man called in by the local crime lords after two young kids take down a big card game that collapses the underground economy. The parallels to the US economy are blatant, complete with recurring clips of Barack Obama and George W. Bush talking about the financial collapse of 2008. But if you ignore the pointed comparison, Killing Them Softly offers a compelling portrait of characters who do anything to get by. They aren't quite the tough guys of so many other mob and gangster movies -- Dominik's character's don't enjoy hurting people, they just want to get paid -- and they fear the consequences of their actions. It's a refreshing spin on familiar 'tough guy' tropes, but don't expect a Scorsese or Tarantino movie here. This one favors conversation and performance well over action. There are a couple of visceral moments in the film (both involving the brutal misfortunes of Ray Liotta's character), but the real reason to see Killing Them Softly is for the performances. 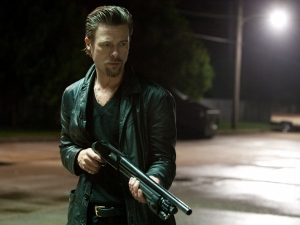 Pitt is reliably good as always, but the real stand-out is the late James Gandolfini as an aging assassin who’s losing his zest for life. Gandolfini carries a few lengthy scenes, delivering an Oscar-worthy performance. The film’s other fine performances come from Richard Jenkins, who plays something of a corporate overlord to the proceedings, and Scoot McNairy (Monsters, Argo) as one of the young robbers.