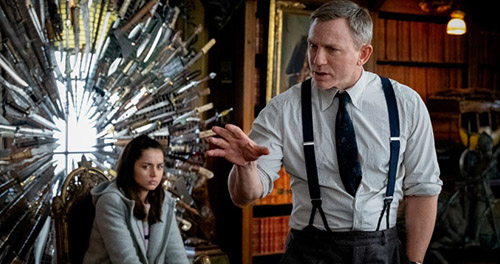 I think one of the hardest stories to tell is a good murder mystery story. That’s why we see so few of them turned into movies. Rian Johnson’s (The Last Jedi, Looper) Knives Out is a beguiling blend of classic and farce, reminding me at times of both Clue and Murder on the Orient Express. Remarkably, its dark comedy never undercuts its dramatic tension. And the colorful cast of characters are bought to life by a superior ensemble.

The patriarch of a board game empire (Christopher Plummer) is found dead and a private detective (Daniel Craig) is summoned to determine who did him in. Various family members have probable cause, including characters played by Chris Evans, Jamie Lee Curtis, Michael Shannon, Don Johnson, Toni Collette, Katherine Langford, and Ana de Armas. And if that’s not enough star power and character actor force for you, look for Frank Oz and M. Emmet Walsh to show up in the cast as well. Everyone gets something to work with, but it’s Craig and De Armas who carry the movie, with quirky and earnest performances, respectively. They receive considerable assists from Evans as the family’s ‘bad boy’ and Plummer, who thankfully has much more than a cameo appearance thanks to plentiful flashback scenes.

I enjoyed the ensemble work in Knives Out, as well as the mansion setting and the score by Nathan Johnson. I love how the mystery unfolds, and that the movie isn’t just a product of clever scripting — it also has heart and humor. A winning combination.