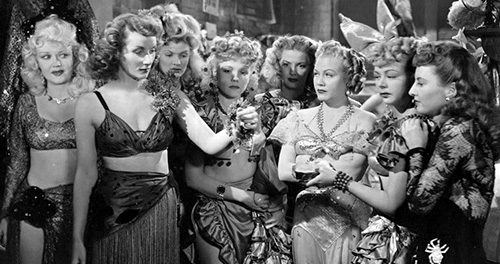 Barbara Stanwyck stars in this comedy about a night of multiple murders at a burlesque opera house. Between the dancers sharing a small dressing space, a few shady boyfriends and stage hands, a snooty visiting Russian princess, and an owner whose keeping secrets of his own, everyone’s a suspect. And even though women are being strangled by their own g-strings (you better believe it!), the show must go on!

Lady of Burlesque is a silly little movie, and I mean that in the best way possible. I wish it had more big names of Stanwyck’s caliber, more larger than life characters and witty one-liners, but its more scenario-driven than that. As such, it gets a little aimless in-between murders. It’s at its best during character moments, especially whenever Stanwyck spars with Michael O’Shea, a comic who courts her despite her many denials. Another high point is when the entire roster of gal dancers join in a verbal take-down of the Russian princess character. But what you’re likely to remember most of all is a musical number Stanwyck performs twice — “Take It Off the E String, Play It On the G String”.

I can’t say Lady of Burlesque lives up to its full potential, because when strippers are being murdered with their own g-strings, that potential is rightly quite high. But it’s a mildly entertaining flick for fans of Stanwyck and another colorful feather in the cap of director William Wellman, who made this film immediately after his well-regarded The Ox-Bow Incident.