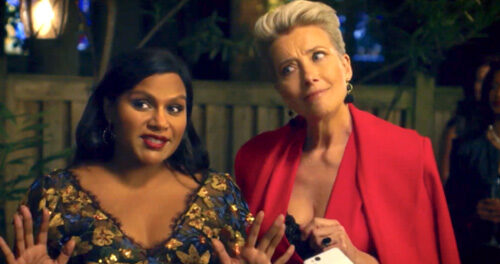 Mindy Kaling wrote and co-stars with Emma Thompson in this fluffy but satisfying comedy about a factory worker (Kaling) who aspires to work as a writer for late night television. When she finally gets her chance to work for a TV icon whose career is in decline (Thompson), Kaling’s character has to fight the all-male, all-white malaise of the show’s writing room, as well as Thompson’s abrasive attitude and deep-rooted reluctance to change with the times.

Late Night is essentially The Devil Wears Prada in a slightly different work environment. It may not score high in originality, but Kaling and Thompson have more than enough charisma and charm to keep you engaged. Thompson is truly in her natural environment with this role, tossing aside a handful of terrifically witty one-liners, making her snobby, elitist character somewhat of an lovable anti-hero. John Lithgow makes a welcome appearance as Thompson’s husband, and Hugh Dancy (TV’s Hannibal) plays one of Kaling’s coworkers who may or may not be trustworthy.

Some of the plot developments teeter on schmaltzy and the third act resolves predictably, but if you’re a fan of Mindy Kaling or Emma Thompson (and you should be), Late Night should give you a few laughs and a couple of feels. With Amy Ryan.