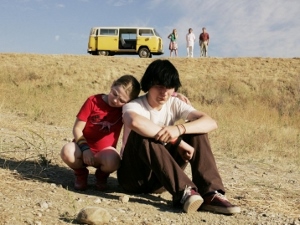 I love road movies and ensemble pieces, but Little Miss Sunshine goes one step further by saying something we all need to hear from time to time: it’s okay to fall short of ambition. The film throws six disparate personalities, all family, into a Volkswagen bus for a weekend road trip so that the youngest of them can compete in a junior beauty pageant. Screenwriter Michael Arndt (currently at work on the new Star Wars movie) builds on the formula created by National Lampoon’s Vacation, but no character here is just for laughs — they all have something gnawing at their insides, and everyone’s nerves get exposed by the time they reach their destination.

I have to single out Steve Carell for his restrained performance as the post-suicidal brother — it’s refreshing to see him droll and low-key like this. Young Paul Dano (There Will Be Blood) is also terrific as the willfully mute son who wants nothing more than to leave the family and become a pilot. (The scene where his dream is shattered is one of my favorites.) Alan Arkin won the best supporting actor Oscar for his portrayal of the cantankerous grandfather, a man who never hesitates to remind you that there are still Nazi bullets in his ass. Arndt also won a much deserved Oscar for his original screenplay. The film was nominated for best picture and best supporting actress (Abigail Breslin). The icing on the cake is an infectiously amusing soundtrack featuring jaunty tunes by DeVotchKa and Mychael Danna. With Greg Kinnear and Toni Collette. …And for the record, I don’t think I’ve ever laughed more in a movie theater than when the Volkswagen bus’s horn goes on the fritz while the family is under the scrutiny of a state trooper.