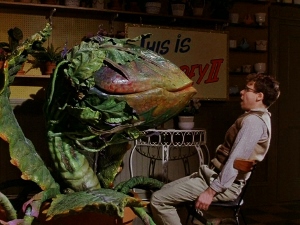 Frank Oz directs the film version of Howard Ashman’s dark musical comedy (which was in turn based on Roger Corman’s original film). Rick Moranis plays a hapless flower shop employee who discovers an exciting new plant that brings much needed business. Problem is, the plant is carnivorous… and it’s getting bigger! Ellen Greene reprises the quirky role she originated in the off-Broadway production, and Steve Martin turns in one of his funniest performances as a sadistic dentist. The songs are fun and engaging (Ashman would later pen songs for Disney’s The Little Mermaid and Beauty and the Beast) and the puppetry is marvelous. The film’s legendary deleted ending, featuring an elaborate sequence where several plants destroy New York City, has been restored to the Director’s Cut on blu-ray. I think both endings work, but the mayhem — achieved through then-state-of-the-art puppetry and miniature photography — takes the cake.