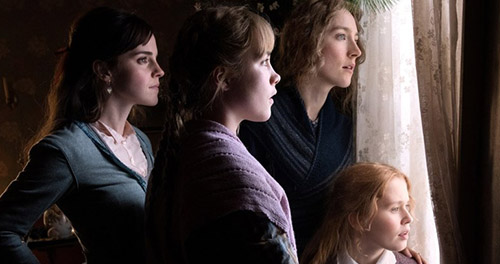 If someone is going to pick up Louisa May Alcott’s much-loved literary classic, dust it off, and serve up a retelling, let it be the Oscar-nominated writer/director of Lady Bird. Greta Gerwig is respectably faithful to the material, but bold in her decision to dice the story up and deliver it in non-linear fashion. In Gerwig’s adaptation, we experience the aftermath of the March women’s choices and tribulations, and then work backwards to the moments those fateful seeds were sewn. It’s a masterful choice that rescues us from sentimental plodding, and invigorates the timelessness of Alcott’s writing through blunt-force juxtapositions of her characters then and now — from doe-eyed innocence, to weathered resolve. Each of the women’s transformations is accentuated in this approach, making this version of Little Women the most grounded and relate-able one ever put on the screen.

Gerwig makes some magnificent casting decisions. Saoirse Ronan and Timothée Chalamet are the master strokes, playing Jo and Laurie. There’s a scene on a hilltop between these two actors that contains some of the best acting of the year. There are also some brilliant supporting selections. Meryl Streep as the curmudgeonly Aunt March is a no-brainer. But you’ll be surprised how much Chris Cooper will affect you with so few words in this film. He plays Laurie’s wealthy father, who stands in as a father figure to the March household while their father is away on Civil War duty. That patriarch is played surprisingly well by Bob Odenkirk, who I didn’t even recognize because I’m just not used to taking him seriously. And Laura Dern is refreshing as the girls’ mother.

But then there’s Beth and Amy March. As Beth, Eliza Scanlen is overly grim from start to finish. We all know she’s a tragic character, but damn, girl. Live a little. Florence Pugh plays Amy, and while I think she’s plenty warm and funny in the role, I think the character’s impishness and immaturity would be better served by a younger actor.

But enough griping. This Little Women is funny, fast-moving, emotional, and fun. It may look like a period piece, but it’s as much about now as it ever was. With Emma Watson, Tracy Letts, and a wonderful score by Alexandre Desplat.