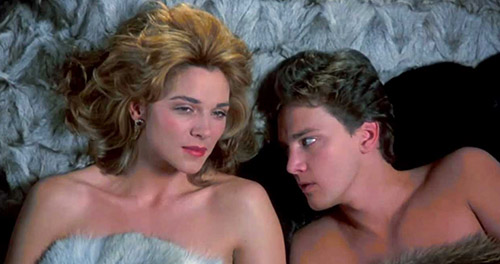 Andrew McCarthy and Kim Cattrall have enough intrinsic charm to carry this incredulous comedy across the finish line. McCarthy stars as an artistic loser who can’t keep a girlfriend or a job. But when a department store mannequin comes to life for him, the two fall in love.

I love the concept and the leading actors, but I wish the movie focused on them more and fleshed out their characters a bit. I was surprised how much of the film’s run-time centered on supporting players, including dueling store owners (Golden Girl Estelle Getty and Steve Vinovich), a dopey security guard (G.W. Bailey), and a smarmy middle-management man played James Spader. Spader’s cartoonish performance is a highlight that captures the spirit of the film more perfectly than anyone else, while Meschach Taylor’s (Designing Women) flamboyant gay window dresser hasn’t aged quite so well.

Mannequin‘s a fluffy cornball sort of movie that you feel bad even criticizing. I think a deeper romance would have extended the film’s shelf life a bit, but there’s no denying that a lot of people remember this film fondly. Starship closes the film with a great song, “Nothing’s Gonna Stop Us Now.”