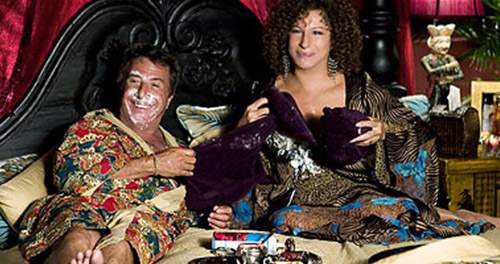 Director Jay Roach and cast return, adding Dustin Hoffman and Barbra Steisand to the mix, for this sequel to Meet the Parents. In preparation for their big wedding, Ben Stiller and Teri Polo need for their parents to meet each other. We got to know her parents — Robert DeNiro and Blythe Danner — in the previous movie. The sequel brings all the characters together in Miami, where his parents — Hoffman and Streisand — turn out to be free-loving hippies.

Meet the Fockers makes fodder out of the culture clash between the families and builds on DeNiro’s paranoid suspicions of Stiller’s character. It’s not the most original thing under the sun, but, hey — we all need a comfort comedy every now and then. I had a hoot watching the cast have a good time — especially Streisand as a warm but confrontational sex therapist.