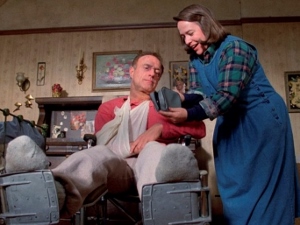 Kathy Bates delivers a spooky Oscar-winning performance in Rob Reiner’s film based on the novel by Stephen King. Screenwriter William Goldman builds a tremendous amount of tension and suspense with barely more than two characters and one room. The payoff isn’t as interesting as the build-up, but Misery is still a fun, scary ride. James Caan is great as the victimized writer, and deserves special credit for a taxing performance where he’s almost always suffering, physically and emotionally. Richard Farnsworth and Frances Sternhagen are also terrific as the elderly sheriff and deputy who are also husband and wife. But this is Kathy Bates’ triumph. She walks a razor’s edge playing the psychotic Annie Wilkes. You never know if she’s going to spin off into a fit of ecstasy or slip into vengeful rage. One moment you’re laughing at her, and the next moment she’s making you cringe. It’s the stuff great movie villains are made of.