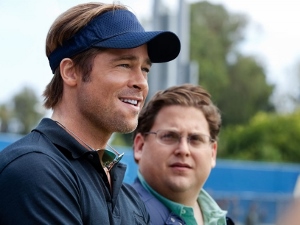 In this film based on a true story, Brad Pitt stars as Oakland A’s general manager Billy Beane, who introduced computer analysis of player statistics into recruitment strategy and forever changed the way baseball is played. Jonah Hill plays the shy, young economist who pitches the recruitment strategy to Beane. Both men were nominated for Oscars for their performances here. The film centers squarely on these two characters and their faith in a tactic no one believed in — not the fans, not the media, not anyone in baseball. They even fight their own field manager (Philip Seymour Hoffman). But their faith in math pays off pretty big when the A’s break the record for longest winning streak of all time in 2002 — and with a team of players few people have heard of, some over the hill, some with noticeable handicaps and injuries. But by recruiting a team with overall winning statistics, instead of recruiting individual rock stars, Beane causes the institution of baseball to take notice.

Moneyball is a triumph of the spirit sort of sports flick, like so many others out there, but it’s less garish and cheesy than the rest, thanks to a screenplay co-written by two of Hollywood’s best writers — Steven Zaillian and Aaron Sorkin. It’s refreshing to see a sports movie that defines victory in the heart of its main character instead of on the playing field. With supporting performances by Robin Wright and Chris Pratt.