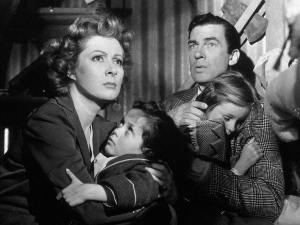 William Wyler’s portrait of an English family weathering the darkest hours of World War II is a moving drama about hope and persistence. There’s a quiet strength and noble resolve about the characters in this movie that I find utterly disarming. Wyler shows admirable restraint in the direction and storytelling, sidestepping any opportunity to sensationalize the material. One of the greatest scenes in the film sees Mr and Mrs Miniver (Greer Garson and Walter Pidgeon) comforting their children from inside a claustrophobic underground bunker. As the bombs fall closer and closer, it’s obvious the family home has probably been destroyed. The next scene could very easily have been the reveal of their demolished home, but Wyler instead cuts to the Minivers receiving their eldest son at the train station the next day. Their half-ruined home is treated as an afterthought, a minor inconvenience that fails to dampen the joy of their togetherness. As Mr. Miniver looks at the rubble that used to be his dining room, he kicks a loose bit of concrete. His youngest son pauses, then looks up at him and laughs. That’s why it’s such a moving picture. Because the Minivers carry on, and that’s the hard part — not the tragedy itself, but the will to keep going.

Winston Churchill said that Mrs. Miniver did more for the war effort than an entire fleet of battleships. Even Adolf Hitler is reported to have been envious of the film’s ability to rouse and unify a war-torn nation. But if Mrs. Miniver is a propaganda film, I think it’s the best possible kind, exhibiting the best qualities of our human nature. The Academy awarded the film with a slew of Oscars, including Best Picture of 1942. With Richard Ney.

In the darkest time of the 20th century, a kindly station manager names a rose after a beautiful lady.