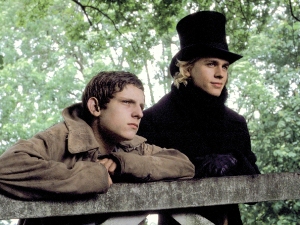 This 2002 classic, period-piece rendition of Charles Dickens’ Nicholas Nickleby is sweet, sentimental, and beautifully executed. I personally found it irresistible. Charlie Hunnam (Sons of Anarchy, Pacific Rim) is perfectly cast as Nicholas, a young man who discovers his own strength of character when called upon to defend his family and friends from villainy. The main villain is his own uncle, played deliciously by Christopher Plummer. Jim Broadbent plays the film’s other heavy, a greasy, one-eyed man who sadistically starves and beats the boys at a remote orphanage where Nicholas is sent by his uncle for employment. It is there where Nicholas rescues a sickly boy named Smike from near-death. The two form a partnership, a foster father/son relationship, really, that forms the emotional backbone of the story. Jamie Bell (Billy Elliott) delivers the film’s most affecting performance as Smike. The cast also includes Anne Hathaway as Nicholas’ love interest and Nathan Lane as the leader of a goofy theater troop where Nicholas and Smike find a little self confidence and temporary solace. Director Douglas McGrath (Emma) doesn’t shy from the darkness or the melodrama of the piece. The work of cinematographer Dick Pope, composer Rachel Portman, and costume designer Ruth Myers is superlative.