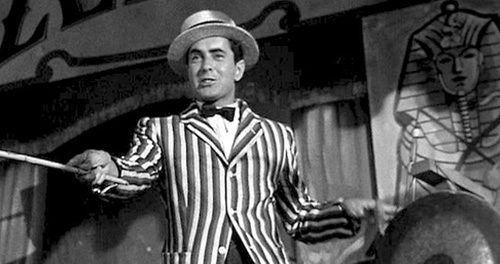 Tyrone Power (The Black Swan) takes a dark turn in this flick about a carnival mentalist whose ambitions get the better of him. At first his character uses his powers for good, like tricking the police into letting his carnival family out of public indecency accusations. But he soon leaves the carnival for a more swanky nightshow act, and later teams up with a psychologist (Helen Walker) to prey on the social elite by channeling the dead relatives they talk about during therapy. All of this becomes unsustainable of course. Despite warnings from his old carny friends, Power tempts fate and ends up right back where he started — at the carnival. But not as a mentalist — as a sideshow geek who bites the heads off chickens!

Nightmare Alley‘s second half isn’t as strong as its first. Once you see Power commit to the ‘dark side,’ the screenplay moves steadfastly in a predictable direction — although just how dark the conclusion will be is still a bit of a surprise. The first half of the movie with the carnival and side-show supporting characters is more fun and engaging. Power carries the film admirably and Joan Blondell is memorable as Zeena, a fellow mentalist and tarot card reader who helps train Power’s character in the art of deception.