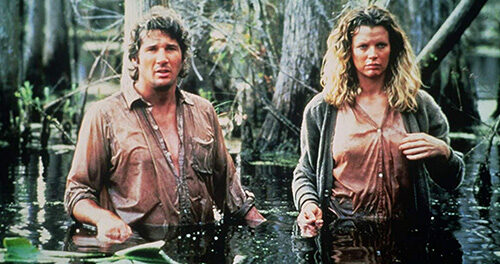 Richard Gere plays a Chicago detective out for justice in New Orleans, where he hopes to find a woman, played by Kim Basinger, who witnessed his partner’s murder. Turns out Kim has a sad story and needs some rescuing of her own, so she and Richard fall in love while they hide from the bad guy (The 4th Man‘s Jeroen Krabbe) who killed Gere’s buddy and owns Basinger — and I mean ‘own’. Like the ‘her mother sold her to him when she was a little girl kind of ‘own”.

No Mercy reeks of the 80s with its stock hero, stock damsel in distress, stock villain, and Alan Silvestri’s repetitive synth score. There’s nothing groundbreaking or especially exciting here. The film’s most redeeming quality is its star power. Gere and Basinger were at the top of their game when the film was made, and while this isn’t a highlight in either actor’s filmography, at least they’re plenty pretty to look at. No Mercy isn’t as steamy as 9 1/2 Weeks, but its best scenes are the ones in which the two stars stop fighting and start falling in love.

With George Dzundza and William Atherton.