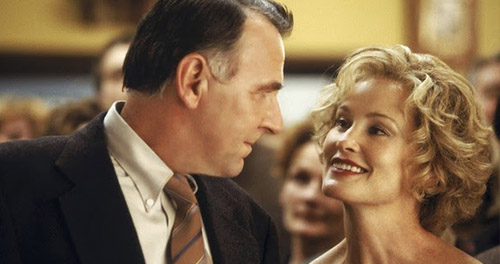 Jessica Lange and Tom Wilkinson star in playwright/director Jane Anderson’s story about a rural midwestern family weathering the father’s decision to undergo a sex change. Wilkinson portrays the father, who endures prejudice from his coworkers and family. Lange plays his shocked wife, who eventually becomes his strongest defender. Hayden Panettierie plays their progressive young daughter, while Joseph Sikora plays their adult son who has difficulty accepting his father’s decision.

Normal is an HBO TV movie from the early 2000’s that deserves some credit for being at the forefront of the transgender movement. There aren’t any surprising twists or turns in the narrative, but Anderson manages to keep the intrinsically emotional story from becoming either too maudlin or indulgent. Other writers would have felt the need to include some moralistic soliloquies, but in some ripe grandstanding moments, Anderson exercises restraint and gives the cast very few words. Lange and Wilkinson nail those moments — they don’t need words to hit home runs.

The rural setting is beautifully captured and the two younger actors, Panettierie and Sikora, hold their own with the leads. The parts of the film dealing with outside prejudice play out predictably, but Normal pushes the envelope within the intimate family dynamic and ultimately has an optimistic message — that love can see us through anything.

With Clancy Brown and Randall Arney.