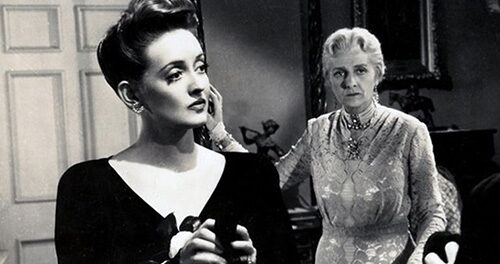 Bette Davis stars as Charlotte Vale, a nervous young woman whose emotionally abusive mother (Gladys Cooper) causes her to submit herself to a sanitarium. Under the care of her doctor (Claude Rains), Charlotte begins to gain the confidence to stand up for herself and appreciate her self worth. On an ocean-liner cruise she meets a man named Jerry (Casablanca‘s Paul Henreid) and falls in love for the first time. But Jerry is married and has a young daughter who exhibits the same kind of troubling behavior Charlotte used to have. Can the two maintain their relationship, or are they destined to remain apart?

Now, Voyager, based on the novel by Olive Higgins Prouty, is a sophisticated drama that doesn’t adhere to any well-trodden formula. Though it may appear Davis’ character is meant to discover self worth in order to become desirable to men, the film’s greatest emotional connection ends up being between Charlotte and Tina, who form a surrogate mother/daughter relationship for each other. In most other movies of this sort, the women would be rescued by male companions, and their needs would be subjugated to male desire. But Now, Voyager subverts these notions. It even presents a feminist portrayal of its male characters by allowing them to step back and acknowledge that there are some things women must do for themselves and which take priority over romantic love.

Davis, normally known for more feisty characters, gets to show a more subtle side in her performance. Henreid and Rains are very likable as the male co-stars, and Gladys Cooper is wonderfully nasty as the tyrannical matriarch. Max Steiner won an Oscar for his catchy, romantic scoring.