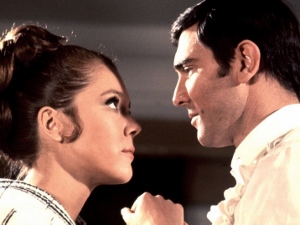 George Lazenby makes his one and only appearance as 007 in this underappreciated installment of the series. Lazenby was a model with little-to-no acting experience trying to take over a role that Sean Connery made iconic. With that said, the amazing thing about On Her Majesty’s Secret Service is how good it is in spite of Lazenby’s contribution. The story this time centers around old archvillain Blofeld (this time played by Telly Savalas), and a dastardly germ warfare plot. Most of the action takes place in the Swiss Alps at Blofeld’s base of operations, which is disguised as an ‘allergy research’ center that Bond infiltrates by imitating a gay geneologist. The escape from the mountaintop base makes for a nice climactic ski chase, but oddly enough, it’s this movie’s heart that distinguishes it from every other Bond film. Bond actually falls in love and gets married. Unfortunately, the honeymoon is cut tragically short, giving On Her Majesty’s Secret Service the most poignant of all Bond finales. Diana Rigg (Game of Thrones) plays the love interest this time and has better chemistry with Lazenby than Connery ever had with any of his Bond girls. Bernard Lee, Lois Maxwell, and Desmond Llewelyn return as beloved regulars M, Moneypenny, and Q, and fans of Absolutely Fabulous will recognize Joanna Lumley as one of the twelve lovely ladies at Blofeld’s clinic.