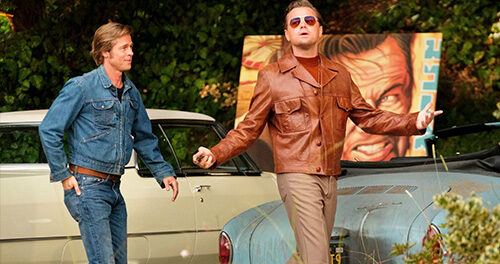 Quentin Tarantino’s ninth film stars Leonardo DiCaprio and Brad Pitt as a television actor and his care-taker stunt-man. The men are close-knit and more dependent on each other than either are able to admit. During the span of just a few days in 1969, they come to terms with the mortality of life and careers while unwittingly stumbling under the shadow of the infamous Manson Family Murders.

Once Upon a Time… in Hollywood is perhaps the least plot-driven Tarantino film to date. Instead of your standard bump-set-spike scene-to-scene progression, Once Upon a Time simply washes over you. In the hands of lesser filmmakers, I’m sure I would have grown bored or impatient. But I’ve learned to trust Tarantino’s sensibilities. The only ticking time clock construction in the film is the knowledge that Sharon Tate, played by co-starring Margot Robbie, is going to be murdered right next door to where DiCaprio’s character lives. Tarantino introduces Roman Polanski and Charles Manson himself as minor characters in the film, so you know how it’s all going to end. The impending historical tragedy hangs over the film, and its the only forward-driving force the movie needs.

Escaping the tyranny of narrative, Tarantino is able to create a film full of breathing room for his colorful personalities, masterful exchanges of dialogue, and stylistic grace notes among a backdrop of period music and period design. DiCaprio and Pitt are reliably terrific. I especially love Pitt in this film. He’s a character of not-so-many words, but his world-weary eyes convey so much. He’s a delight when provoking Bruce Lee (Mike Moh) into friendly hand-to-hand combat. And as crazy as it may sound, my favorite scene is one in which Pitt just turns on the TV in his trailer and makes dinner for himself and his dog. As pedestrian as it sounds, Tarantino turns the moment into magic.

If you’ve seen Tarantino’s other films, you are probably well-prepared to enjoy this one. If Inglourious Basterds is one of your lesser favorites, you might not enjoy this one as much. But as far as I’m concerned, Tarantino is nine-for-nine at this point. Like all his other work, Once Upon a Time… in Hollywood is an engaging, well-crafted, celebration of the cinematic arts.