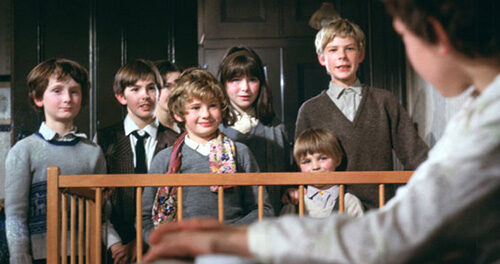 Seven religious children bury their dead mother in the rose garden and tell no one of her demise for fear they’ll be separated and put in orphanages. Relying on seances with their mother to guide them through difficult decisions, the children are able to survive on their own for a while. But when their estranged father (Dirk Bogarde) arrives, destroys their mother’s makeshift tabernacle and starts bleeding her bank account dry, the children are forced to retaliate.

This glum British production is unusual for featuring child characters while not being a film suitable for young viewers. There’s nothing cutesy or remotely comedic in the movie. The mother dies in the opening moments and the film soon spirals into something reminiscent of Lord of the Flies when the eldest daughter begins channeling their mother’s spirit to answer questions and determine punishments. First I was disturbed that the eldest daughter would pull such mind-tricks on her siblings, but then I was even more disturbed when she breaks down in front of the second eldest, distraught that she can’t hear her mother’s voice anymore.

Director Jack Clayton (The Innocents, Something Wicked This Way Comes) gets passable performances from the child ensemble, with Pamela Franklin (The Prime of Miss Jean Brodie), Mark Lester (Oliver!), and Phoebe Nicholls standing out from the others. Georges Delerue’s romantic scoring underlines the childhood innocence of the story… even when that innocence conjures the spirit of a dead woman in a backyard shed-turned-tabernacle.