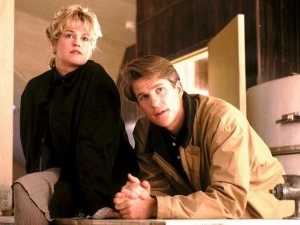 Melanie Griffith and Matthew Modine rent out a room of their San Francisco dream home to the tenant from Hell and barely escape to tell the tale. Michael Keaton plays the psycho boarder, a guy who hammers and makes noise all night long, lets cockroaches loose in the building, kidnaps their cat, and eventually encourages physical assault — all in an effort to use every legal loophole in the book to win the house out from under them. Pacific Heights escalates nicely and the three leads all do good jobs. Keaton’s character is particularly nasty, which makes it even more delightful when Griffith starts to beat him at his own game. Hans Zimmer’s score is a great listen on its own, though a bit overwrought in the final film. Director John Schlesinger (Midnight Cowboy, Marathon Man) manages to capture a little of a Hitchcock vibe in the proceedings, including a cameo appearance by The Birds‘ Tippi Hedren. With Mako, Laurie Metcalf, Dan Hedaya, and Jerry Harden (The X-Files).