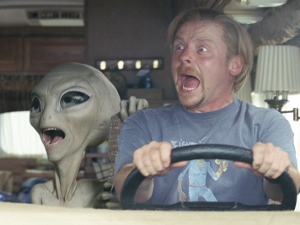 Simon Pegg, Nick Frost, and Seth Rogen are intrinsically likable enough to make this goofball movie watchable. Pegg and Frost star as two guys vacationing to Roswell, New Mexico, the UFO capitol of the world. Once there, they meet an alien named Paul (voiced by Rogen) who has escaped Area 51. The three embark on a road trip to return the alien to his mother ship. Bill Hader and Joe Lo Truglio’s characters don’t need to be there, and Kristen Wiig is stuck playing a one-joke character, but it’s nice to see Blythe Danner let her hair down. Her exclamatory requiem for marijuana is my favorite moment. With Sigourney Weaver and Jason Bateman.