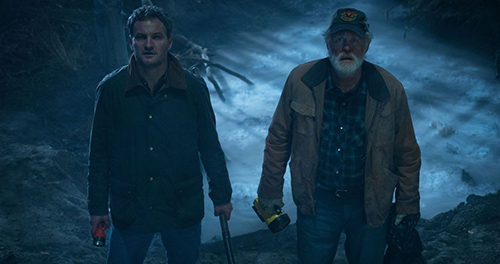 Ready for another Stephen King remake? I’m guessing we’re going to see a lot more of them soon, thanks to the success of It. And It was ripe for a remake because, while it’s loved in certain ways, a lot of horror fans agree that it falters in others. Pet Sematary, on the other hand — not so much.

King’s story centers around a family that has just moved to the countryside to enjoy a slower, more serene lifestyle. Unfortunately for them, there are huge tanker trucks that frequently zoom past their front yard. And equally unfortunate is the fact that far back in their property is an ancient, mystical ground where if you bury something dead, it comes back alive. If the family cat dies, resurrection is all too tempting when a daughter’s broken heart lies in the balance. But what if one of your children dies?

Mary Lambert’s 1989 version is widely regarded one of the better Stephen King adaptations to date, and rightly so. It’s creepy, atmospheric, and emotional. It’s a proper horror movie. This new 2019 version from the directors of Starry Eyes is just as emotional, if not more, and it takes itself a little more seriously than Lambert did. It follows a trend in many genre movies nowadays to push aside fantasy, tone down style, and treat storytelling more straightforward and realistically. I know many people like this approach, but I don’t. I like my Batman’s Tim Burton and I like my Pet Sematary’s Mary Lambert. I see no reason not to celebrate the poetic license genre movies offer — so why not increase the image contrast, make those shadows more stark, those effects more gory, and that music more evocative?

There’s a character in both films named Jud Crandall. He’s played by Fred Gwynne in the 1989 film and by John Lithgow in the 2019 version. Now both actors are considered character actors, but Gwynne carries the excess baggage of fame from the TV show The Munsters. And, well, he’s kinda funny looking. And funny sounding. He’s a weird casting choice, but he’s brilliant in his version of Pet Sematary. All of his peculiarity helps us suspend our disbelief, to believe that, indeed, yes — there’s a mystical burial ground out there, and if you really want to, you can bring the dead back to life.

Now, I love John Lithgow. I think he’s a national treasure. But his Jud Crandall in the 2019 version isn’t so weird. He’s not funny looking or funny sounding. In fact, he looks a little like Santa Claus. His version of the character has to try harder to make us believe in magic or mystery. This trend toward hyper-realism in genre movies is sometimes novel or interesting, but there are certain kinds of stories that need that heightened style, that off-kilter actor, or that cock-eyed camera angle to transport us into the characters’ shoes and into the world of the story. If you want movies to remind you of everyday reality, go to work — not the movies.

So, obviously I prefer Mary Lambert’s 1989 version. But this remake isn’t a bad movie by any stretch. It’s faithful to the story in broad strokes, but puts a few of its own fresh spins on things. I didn’t mind anything that was changed. I thought they were actually some of the more interesting parts. It’s better than the original in mining the subtext of King’s story, in talk of life and death, and whether there’s a heaven or hell. Amy Seimetz gives the film’s strongest performance as the mother, haunted by memories of her tragically deformed sister. (You get more of that backstory, too.) And the very last scene in the remake, quite unlike anything from the original, is a really cool moment.

Starring Jason Clarke (Dawn of the Planet of the Apes, Everest) and Jeté Laurence.