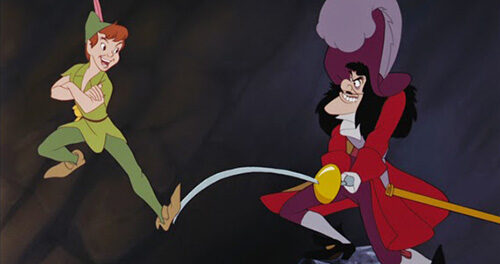 The Darling children — Wendy, Michael, and John — take a magical trip to Neverland with a hero only children can see or believe in: Peter Pan. Once there, they meet Pan’s Lost Boys, visit the mermaids, pow-wow with the Indians, and have a couple of entanglements with the dastardly Captain Hook.

Peter Pan is not one of my favorite Disney animated ‘classics’. I like the scenes between Captain Hook and Smee, especially when the old crocodile is nearby and rearing to eat the rest of Hook (he already ate his hand). In the early part of the film, Nana the dog is an endearing character. And Tinkerbell has her moments throughout the movie. But Peter Pan and the Darling children are dull as dishwater.

The film also lacks a compelling dramatic hook (no pun intended). Once the children go to Neverland, there’s never an over-arching goal that needs to be achieved. Instead the goal changes with the episodic nature of the story — first it’s to show the Darlings Neverland, then it’s to rescue Princess Tigerlilly, and then it’s to have one last encounter with Captain Hook. It all feels arbitrary and there’s no dramatic weight to any of it. And, yes, even a children’s animated movie needs some dramatic weight.

The early scenes in London are far more beautiful than anything we see in Neverland — a real missed opportunity. The score is obnoxious, punctuating every single character movement — the worst example of musical ‘Mickey Mousing’ I think I’ve ever heard. What’s worse is that the songs, for the most part, are forgettable and fail to move the story forward. They’re show-stoppers, but not in a good way.

With the voices of Bobby Driscoll, Kathryn Beaumont, Hans Conried, and Bill Thompson. Based on J.M. Barrie’s original story.