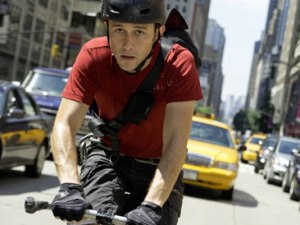 Joseph Gordon-Levitt stars as a New York City bicycle delivery man engaged in a never-ending cat-and-mouse chase with a nasty copy (Michael Shannon) for possession of a very valuable package. Premium Rush reminds me of movies like Rad and Thrashin’ — it’s not much more than a fetishistic showcase of fancy bicycling. And without any attachment to the thinly-drawn characters, the chase gets tiresome well before the mid-point. The script, co-written by director David Koepp, plays with form and structure in an annoying “look at me!” kind of way and the film never earns the few ‘big’ emotional moments it tries to pull off. The score by David Sardy only reinforces the feeling that you’re watching a video game that really wishes it were a movie.