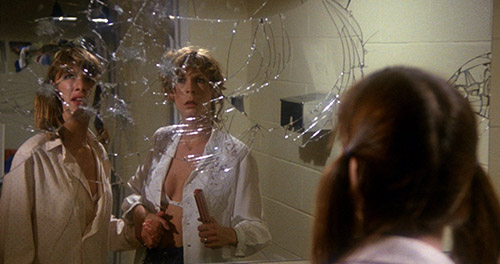 A masked killer stalks four teenagers at the prom, six years after they accidentally killed a fellow classmate. Prom Night is part of the slasher boom of the late ’70s and early ’80s. Jamie Lee Curtis stars as the sister of the killed classmate. Leslie Nielsen also appears as her father. Neither of their talents are put to especially good use here, though. The characters are all thinly drawn and no one is engaging enough to carry the film. Instead, the film gets its forward momentum from an overriding mystery — who the hell is the killer? There’s a good chance you’ll guess before the mystery is revealed. But if you’re in the mood for an old fashioned killer-on-the-loose movie, Prom Night might still satisfy your itch. And if you’re a fan of disco, all the better — because the last thirty minutes of the movie is pretty much wall-to-wall generic disco music. Groovy!