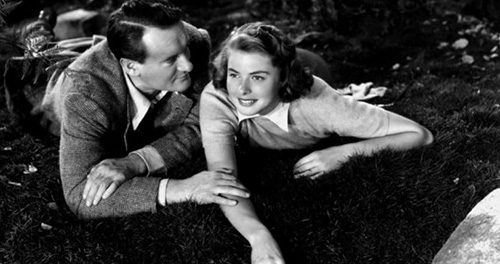 Ingrid Bergman, George Sanders, and Robert Montgomery star in this drama/thriller about two men in love with the same woman. One (Montgomery) is suicidal, and when he can’t have her, he frames the other (Sanders) for his own death. The film ends with a courtroom trial and Bergman’s character trying find evidence of Sanders’ innocence.

You have some sympathy for all three leading characters up to a point. Montgomery’s character is jealous, but also recently escaped from a hospital taking care of him. But when he kidnaps and murders a cat that Sanders gave Bergman, that sympathy quickly dissipates and the movie becomes a long stretch of waiting for Bergman and Sanders to realize what’s going on.

The set up, or how Montgomery frames Sanders, is one of the highlights of the movie. The third act is the strongest, but also the most hurried. The climax happens so suddenly, I found myself seeing ‘The End’ and wondering, what just happened?

Rage in Heaven is definitely B-level material for its stars’ filmographies. Only Sanders has much to work with. Bergman, as beautiful and charimatic as she is, is really given a thankless task here until the final minutes of the movie. She just receives love and adoration for an hour, then becomes confused, and finally hits the road to dig up some clues and save someone from a death sentence. Not a bad film, but probably only for fans of Bergman or Sanders.