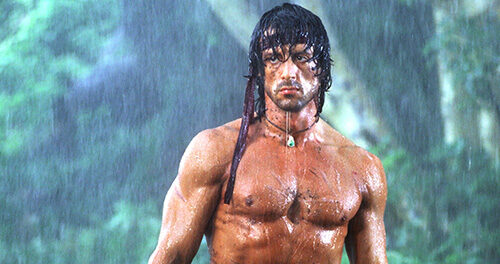 First Blood is a terrific action movie because, as absurd as it gets toward its conclusion, it’s rooted in solid drama and with great verisimilitude. This sequel, cowritten by Sylvester Stallone and James Cameron (Titanic, Avatar), and directed by George Cosmotos (Tombstone, Leviathan), lacks that sincerity or realism. It’s much more of a comic-book superhero movie, complete with a leading hero who looks more like a pumped-up parade float than a human hero.

The film begins with Rambo being pulled out of a hard labor camp by returning co-star Richard Crenna, who takes him back to Vietnam to join a covert mission to find prisoners of war still captured in the country. But when Rambo finds POW’s and calls for rescue, the government isn’t there for him. They abandon him to torture by not just the Vietnamese, but the Russians, too. And anyone who knows Rambo knows that kind of betrayal won’t go unpunished. So after Rambo escapes the Russians and Vietnamese, he’s also got to deal with his own government, embodied in a smarmy performance from character actor Charles Napier.

Usually, I don’t like tacked-on love stories, but some of the most resonant scenes in Rambo are with actress Julia Nickson, who plays a pretty tough Vietnamese woman who helps Rambo on his journey. Her scenes are the only ones in which Rambo speaks very much — the only ones that don’t exist for pure exploitation value. Yes, the montages of Rambo taking out groups of bad guys one by one are kinda cool. And there are a lot of cool helicopter scenes, too. But there’s very little anchoring the action to any substance. And substance is what made us care so much for John Rambo in First Blood. The sequel tries very hard to justify its celebration of muscle and firepower in its final minutes, but it only succeeds in reminding us what a more engaging movie its predecessor is.