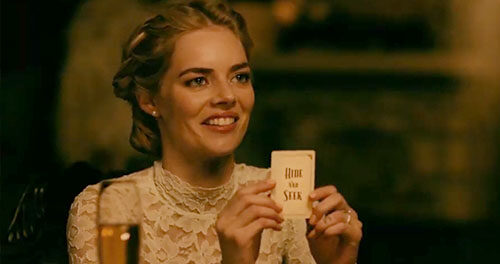 Samara Weaving (Hugo’s niece) leads an ensemble cast in this dark comedy about a young woman marrying into a wealthy gaming dynasty. As per tradition, the newlywed must participate in a randomly chosen game with the family at midnight following the wedding. Weaving goes along, but soon discovers that the innocuous round of hide-and-seek is actually a deadly game of hunt-and-kill — with Weaving targeted for ritual sacrifice.

Ready or Not features sumptuous sets, wardrobe, and art direction. I adore the inclusion of Andie MacDowell as one of the peculiar family members, and Nicky Guadagni steals the show as nasty old Aunt Helene. I liked the movie well enough until about the mid-point, when I started feeling like it should have been more stylized and more comedic. Weaving, Guadagni and MacDowell seemed to capture the right, Grand Guignol tone of the film in their performances, but the film is muddled by parallel commitments to earnest drama and believability. Brian Tyler’s score, for example, underscores legitimate horror when it should probably be more embracing of the film’s tongue-in-cheek humor and ridiculous premise. A beautifully on-point climax and denouement help save the movie, but I can’t help but feel this material would have been better suited in the hands of Tim Burton or Wes Anderson.