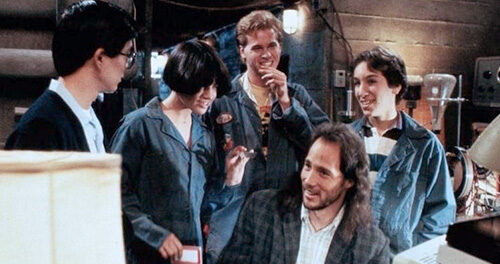 Gabe Jarret stars as a 15-year-old science prodigy who is accepted into a tech college where he’s immediately placed on a cutting-edge laser project with other college-aged brainiacs. Val Kilmer plays his roommate, a goofy prankster whose irreverent attitude belies his academic reputation. Kilmer encourages Jarret to come out of his shell and have fun once in a while. Some of that fun comes in the form of Michelle Meyrink, a hyperactive nerd with whom Jarret falls in love.

For a while, Real Genius is about warring nerds — the ones who act condescendingly and wear ascots (represented by Robert Prescott) and the ones who wear T-shirts and remember to have fun. But when the good nerds realize their laser project is actually a top-secret military weapon, they start war against their professor (the always smarmy William Atherton) and attempt to sabotage the device during its demonstration.

Real Genius is one of the better teen comedies from the ’80s. Kilmer, Jarret, Meyrink, and the supporting cast members all have great charisma that carry the piece over a few shaky jokes and a third act that gets just a little too serious for a while. I love that director Martha Coolidge (Valley Girl, Rambling Rose) chose the widescreen aspect ratio — a rarity among comedy films — and that the cinematographer is the Oscar-winning Vilmos Zsigmond. Teen comedies don’t get this kind of craftsmanship very often.

Great comic set pieces include the conversion of the dorm hallways into an ice rink, the disassembling and reassembling of Prescott’s car in his room, and the grand finale involving the destruction of a home by popcorn.