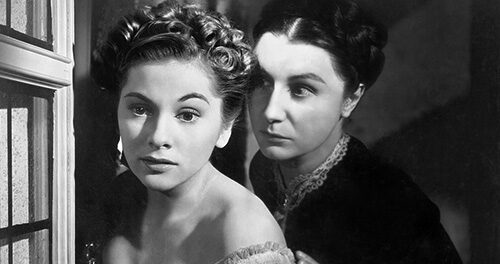 Alfred Hitchcock’s first American film and only one to win a Best Picture Oscar is Rebecca, starring Joan Fontaine, Laurence Olivier, and Judith Anderson. Based on the novel by Daphne du Maurier, the film follows a nervous woman (Fontaine) who catches the eye of a wealthy widower (Olivier). After they marry, she is taken to his ancestral mansion, Manderley, where the icy cold head housekeeper, Mrs. Danvers (Anderson), quickly gets under the new bride’s skin. Fontaine’s character soon realizes that the deceased first wife, Rebecca, still holds a powerful spell over her husband and their housekeeper. As the mystery behind that spell unfolds, Hitchcock’s beautiful Victorian melodrama becomes more and more fascinating.

Rebecca is one of my favorite Hitchcock films. I love how Fontaine’s character experiences the mystery surrounding the dead woman’s control over the characters. Every scene reveals a new layer — first we know Mrs. Danvers hates Fontaine, but we don’t know why. Then we learn it’s because Mrs. Danvers had an obsessive adoration (or romantic love?) for the deceased. But then we learn to what shocking lengths Danvers will go to honor Rebecca’s memory, including a chilling scene in which she tries talking the distraught Fontaine into leaping off a balcony to her death. And all of this is before the third act descends to even deeper discoveries.

The cast is superb, with Fontaine spiraling into emotional insanity, Olivier playing it curiously aloof until we reach revelations that explain the actor’s approach, and Anderson playing a more theatrical but very memorable villain. Boosting the solid script and casting are Hitchcock’s elegant and meaningful camera movement, George Barnes’ gorgeous lighting, and Franz Waxman’s romantic score.

With George Sanders as a smarmy third-act antagonist, Nigel Bruce, Reginald Denny, and Gladys Cooper as a comical socialite.