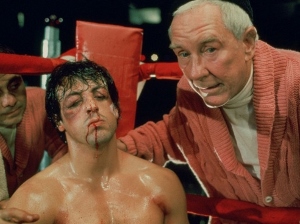 Sylvester Stallone wrote and stars in this low-budget box office triumph that went on to win the Best Picture Academy Award. Rocky is a remarkable blend of fantastic performances, understated screenwriting, and straightforward execution. It’s very hard not to get swept up in the characters’ hopes and dreams. There are a couple of incredible scenes that really seal the deal for me. One is when Rocky and Adrian kiss for the first time, and the other is where Rocky and Mickey let it all out in Rocky’s apartment. There’s so much unsaid in both these disparate scenes, but through Talia Shire’s and Burgess Meredith’s performances, you get oodles of painful background in the way a shy woman looks up from the ground or in the way an old man simply states his age to a closed bathroom door. I also have to applaud the ending — as heroic as you’d imagine, but for reasons other than you might expect.