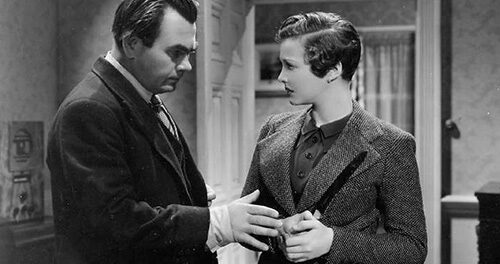 Sylvia Sidney and Oskar Homolka star in this Alfred Hitchcock suspense yarn about a movie theater owner (Homolka) who is conspiring to set off a bomb in London. While a Scotland Yard detective (John Loder) tries to identify and arrest the saboteur, the destructive plan comes to a head when Homolka sends Sidney’s unwitting young brother (Desmond Tester) to the predetermined location… with bomb in hand.

Sabotage is a tight, quickly-paced film with two great sequences. The first is the countdown to the bomb’s detonation as we follow the poor boy through London, being stopped by salesman, parades, and traffic until it’s far past time for him to have delivered his package. I won’t say how the sequence ends, except to say Hitchcock received a lot of public outcry about it. The second, more subtle but equally memorable scene is a climactic confrontation between Sidney and Homolka. She knows he is the bomber and contemplates killing him with a dinner knife. The two lock eyes at one point, and then have a series of completely non-verbal revelations that end in one of the character’s deaths. It’s rare to see such a scene played out at length without any dialogue — it’s all in the eyes and hands.

I enjoyed all the performances mentioned above, as well as the film’s locations — which include the movie theater auditorium and a sea turtle aquarium. And I’m glad Hitchcock is not without a sense of humor when the storyline is as tense as this one. He alleviates some of the tension through humorous side-characters and funny, non sequitur exchanges from passersby and extras.