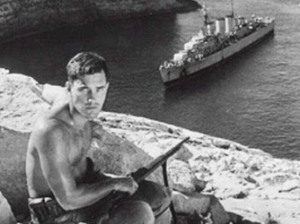 This nifty WWII naval actioner is slow to start, but after the midpoint it offers an engaging blend of drama and suspense. Jeffrey Hunter (The Searchers) plays Andrew Brown, a signalman in the British navy who survives the sinking of his ship and escapes German capture. While the Germans carry out repairs to their vessel in an island harbor, Brown becomes a sniper. He takes refuge in the rocky cliff side and starts picking off German soldiers, hoping to stall their progress long enough for British reinforcements to arrive. Helping to make this more than your average matinee war movie is a potent dramatic twist — that Brown is the illegitimate son of the naval commander coming to his rescue. Michael Rennie (The Day the Earth Stood Still) and Wendy Hiller (A Man for All Seasons) play Brown’s parents. The script, based on a novel by C.S. Forester (The African Queen), lets the audience in on the secret, but neither father nor son ever learn their relation to one another during the course of the film. This admirable restraint in storytelling allows for a compelling teaser of a finale.