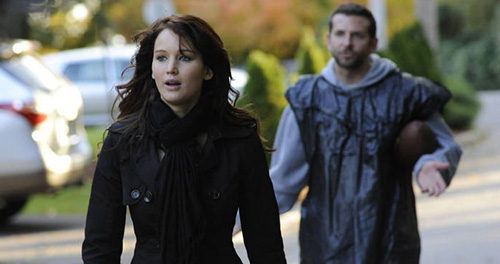 Bradley Cooper and Jennifer Lawrence star in this tale of two clinically depressed people (he’s diagnosed bipolar) who strike up an unusual relationship. She teaches him to dance with her for an upcoming competition in exchange for delivering letters to his ex-wife, who has a restraining order against him. While he obsesses over the ex, Lawrence begins to pine for Cooper. Everything comes to a head when Cooper’s superstitious father (Robert DeNiro) bets a fortune on the dance competition.

This summary wouldn’t normally excite me about a movie, but like David O. Russell films The Fighter and Joy, Silver Linings Playbook brings us so intimately into the lives of its characters that their daily dilemmas become as palpable and engrossing as the world shattering stakes in any summer tent pole venture. Cooper and Lawrence are playing parts of specificity that are usually reserved for the theater, not for film. They humanize people fighting with mental illness, and without relegating them to the sidelines. The film is about them and a celebration of them. It’s not a stretch for us to put ourselves into their shoes, because we all act out, fly off the handle, and have embarrassed ourselves with our own behavior. Cooper and Lawrence aren’t playing afflicted individuals. They’re playing everyone.

DeNiro is reliably good (and a tad darkly comic) as Cooper’s father, and Jacki Weaver, as the mother, bares on her face the equal amounts of heartache and joy a mother would have living with two such volatile men. The cast roster also includes the underappreciated Julia Stiles and Dash Mihok, and gives Chris Tucker a chance to prove some dramatic chops.

David O. Russell has said that after I Heart Huckabees, he lost his bearings as a filmmaker and wandered an existential wilderness until he figured out how to move forward. He said the key was in telling very specific stories about very specific people. So far, this approach is working supremely well for him. There’s no other filmmaker working today whose movies allow me to slip so readily and easily into the lives of others. In this time of empathy shortage, that’s a powerful gift indeed.